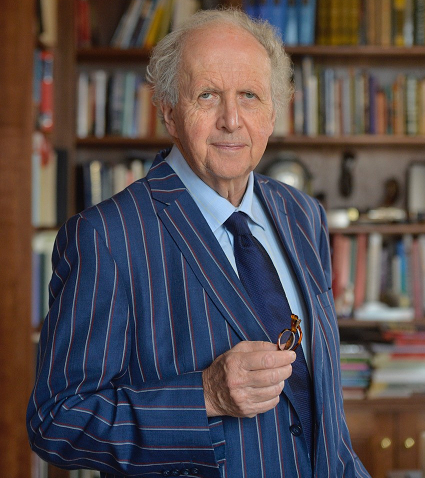 Alexander has written a poem inspired by the Olympic gold medalist Eric Liddell who was the hero of the film Chariots of Fire. He will recite his new work at an online event on 26 November to celebrate the 40th anniversary of the Eric Liddell Centre (ELC) which is named after the famous Scottish Olympian.

A talented young composer, Alexander McNamee, a pupil at George Watson’s College, has set the new poem to music in a vocal piece which will be performed at a later date when restrictions allow.

The two Alexanders will come together to join the other stars supporting the online broadcast of the ELC’s 40th anniversary.

The centre is an Edinburgh based care charity and community hub, providing specialist dementia support together with a Carers Programme and Befriending Service.

Alexander McCall Smith has a close relationship with the ELC as he has been a patron since 2012,

“The Eric Liddell Centre enjoys a special place in the affections of the people of this city. It is very much in the spirit of the man after whom it is named, and I am sure that there will be many people who will wish to join me in celebrating its achievements.”

Following national guidelines linked to COVID-19, the ELC made the decision to go ahead with the anniversary celebration online.

Joining in via a link from her home in Canada, Eric Liddell’s daughter Patricia Liddell Russell will also participate to talk about her inspirational father.

“I am so pleased that Alexander, Sally Magnusson and my brother Sir James have kindly agreed to participate in our 40th Anniversary Celebration. I’m delighted that the exceptionally talented young composer, Alexander McNamee, will also join us via a video link and discuss his new composition.

“I am very proud of the Eric Liddell Centre and all that it stands for. It will be a wonderful evening broadcast via Zoom and provides me with the opportunity to celebrate the work and achievements of the centre over the last 40 years and the dedicated team who work here.”

The 40th Anniversary Celebration takes place on Thursday 26th November at 7.00pm virtually via Zoom. Tickets cost £40 per log on and are available to book via Eventbrite by visiting the link:

All monies received will support the ongoing delivery of the Eric Liddell Centre’s caring services. For further information, please contact Zsofia at molnarz@ericliddell.org

This website uses cookies to improve your experience while you navigate through the website. Out of these, the cookies that are categorized as necessary are stored on your browser as they are essential for the working of basic functionalities of the website. We also use third-party cookies that help us analyze and understand how you use this website. These cookies will be stored in your browser only with your consent. You also have the option to opt-out of these cookies. But opting out of some of these cookies may affect your browsing experience.
Necessary Always Enabled
Necessary cookies are absolutely essential for the website to function properly. These cookies ensure basic functionalities and security features of the website, anonymously.
Functional
Functional cookies help to perform certain functionalities like sharing the content of the website on social media platforms, collect feedbacks, and other third-party features.
Performance
Performance cookies are used to understand and analyze the key performance indexes of the website which helps in delivering a better user experience for the visitors.
Analytics
Analytical cookies are used to understand how visitors interact with the website. These cookies help provide information on metrics the number of visitors, bounce rate, traffic source, etc.
Advertisement
Advertisement cookies are used to provide visitors with relevant ads and marketing campaigns. These cookies track visitors across websites and collect information to provide customized ads.
Others
Other uncategorized cookies are those that are being analyzed and have not been classified into a category as yet.
SAVE & ACCEPT
Powered by